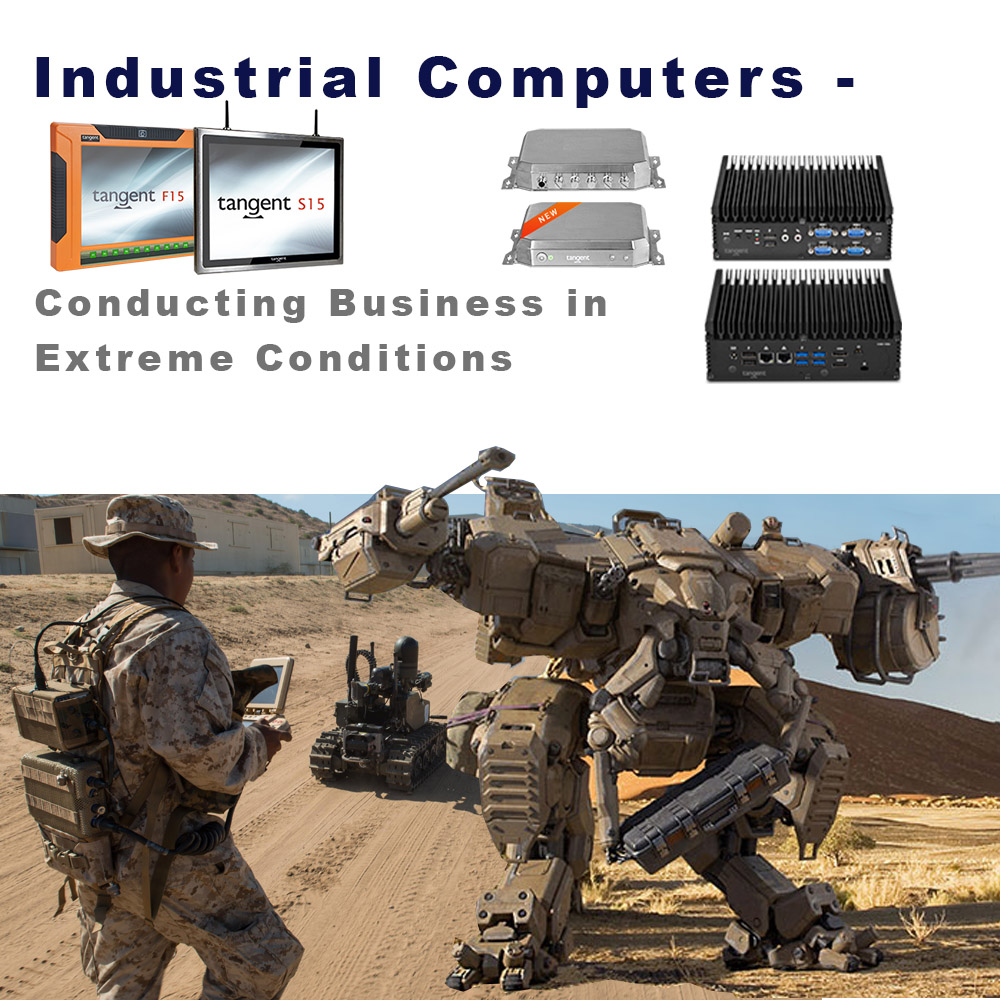 It’s no surprise that extreme weather can have a significant impact on industrial operations, which often times take place while on the move or exposed to the elements. For military personnel working in Afghanistan, summers are blistering hot and winters can be bitterly cold, and a 2007 Air Force Weather Agency report on Iraq’s summer weather marked a record temperature of 124 degrees fahrenheit. Temperatures of that nature are nearly intolerable to human beings, much less to sensitive computer equipment that emit heat on their own. For that and many other reasons, sturdy industrial computers are a necessity to ground forces and any other industry working in harsh conditions.

With thermal and shock management in mind, Tangent created a line of rugged industrial PCs to suit a variety of environments, be it frigid or sweltering. Both the Rugged E3 and Rugged E2 have operating temperatures ranging from -13° to 158°F (-25° to 70° C) and storage temperatures ranging from an amazing -22° to 185°F (-30° – 85° C). Another excellent feature is that they have no moving parts to wear out. Being fanless and sealed ensures that dust, humidity, and other contaminants cannot get into the industrial computer and wreak havoc as it often does with standard PCs.

How do they manage to regulate extreme temperatures without fans? By using conduction cooling! Tangent’s military-grade industrial computer cases have fin-like design that acts as a heat conduit to draw thermal energy away from the processor and dissipates the heat. Conduction cooling literally conducts the heat away from the source to the cooler outer wall of the enclosure. This makes the enclosure of the industrial computer itself a heat radiator. Although forced air cooling is cheaper and easier to implement, conduction-cooled designs provide greater flexibility than forced-air, particularly for extreme conditions. An added bonus to this cooling method is that it provides a completely noise-free operation for the industrial PC.

Besides the excellent cooling components, the sturdy construction of the mini PCs protects them from vibration, sudden movements or drops, which make them prime candidates for use as a vehicle mounted industrial computer. The Rugged Tank is especially suited to in-car applications. In addition to being rated for extreme temperature, the conductive case is MIL-STD-810F military standard tested for shock and vibration. The Rugged Tank industrial computer also has an optional iRIS-2400 remote management module that provides IPMI 2.0 compliant support that monitors hardware operation, can be used to autonomously to reset the machine from a remote location and also provides a reliable remote access tool. A very handy thing to have for a PC that is installed in hard to reach places!

In the unfortunate event of a crash, the Rugged series industrial computers come equipped with RAID support and the E series even has removable drive bays to quickly swap out bad hard drives. This also helps to meet offsite data retention and storage requirements organizations often have for auditing purposes. Both form and function play heavily into the construction of the Rugged industrial computer series to ensure reliable and consistent performance in any work capacity or environmental situation and aims to be as flexible as possible to meet the demands of ever changing industries and the climates they do business in.