Automation is on the rise both nationally and globally, in part because of the ongoing pandemic.85 million jobs are set to be upended by automation by 2025 — that’s according to a report by the World Economic Forum. However, this same automation is also slated to bring 95 million new jobs to the economy, and may help usher in a boom of manufacturing. In the short term, automation with tools such as industrial computers can help factories operate in effective, socially distanced ways. In the long term, automation can help manufacturing facilities survive the pandemic and prosper while doing so.

It’s no coincidence that automation is on the rise currently. Automation in factories has seen a recent boom even before the pandemic thanks to the introduction of smart factories. Smart factories leverage the latest technology to create cutting edge facilities that often employ more robots than people. These facilities can serve as a blueprint for other factories, including your own.

Social Distancing In The Factory

During this pandemic, every factory’s top priority should be the safety of its employees. By automating key steps in the manufacturing process, less workers can be stationed on assembly lines and on the factory floor at once. This can help guide social distancing efforts, and allow employees to work in smaller crews that limit their contact with other personnel. 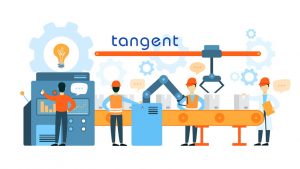 Above all, the biggest advantage to including Tangent industrial grade computers in your facility is the boost in productivity they bring. Tangent industrial computers can house up to 32 gigabytes of ram — more than enough to run multiple automation applications at once. Smaller, mini industrial computers can fit into your facility while taking up the lowest possible amount of space, no rearranging required. With Tangent, a boost in productivity is both possible and seamless.