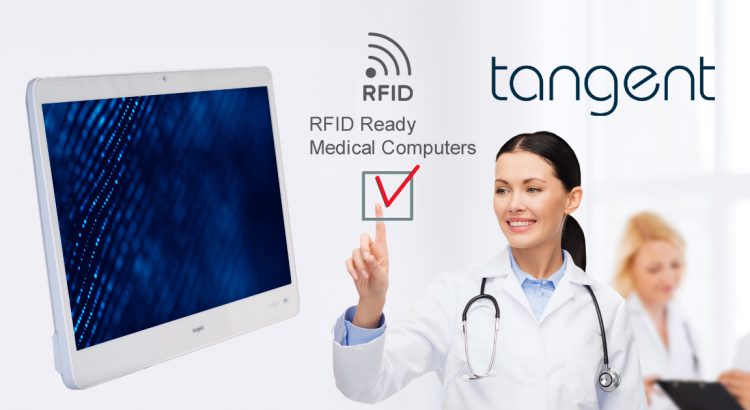 RFID stands for Radio-Frequency Identification. The technology standard is made up of RFID tags and readers. These tags have small radio receivers and transmitters inside them. When in contact with a reader, the tag will respond and transmit information it is carrying to the reader.

RFID readers are the other half of the RFID equation. They pick up the information from tags and display it on devices. Many medical computers rely on clunky RFID reader adapters. These adapters take up ports on the medical computer, as well as desk space. Further, they are prone to being accidentally disconnected and lost.

First, your medical staff need strong, long, and complex passwords. By having your IT department tie badges to safe passwords, your hospital can have an increased layer of cyber security. Second, this allows your medical staff to have long passwords without having to remember them exactly or input them slowly everytime they access their computer.

RFID tags and readers are quickly becoming a required tool in every workplace, including the hospital. Medical computers with built-in readers help your hospital stay on top of the future and prepare for what’s next. Make sure your hospital has the right tools by calling Tangent Sales today and asking about their range of RFID enabled devices. 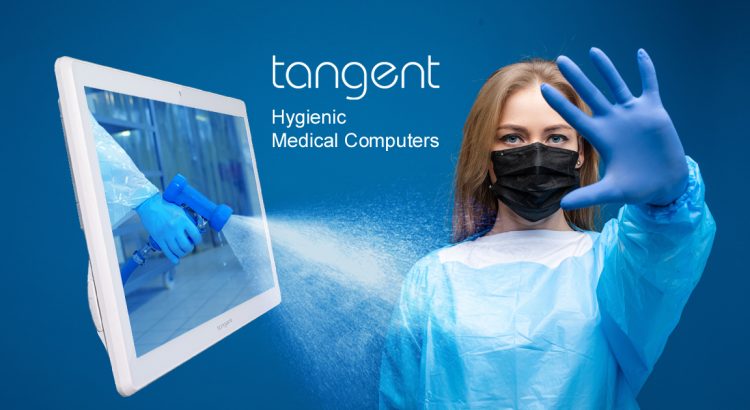 Cleanliness remains a top priority for hospitals everywhere. Since the introduction of handwashing into the medical field, efforts to curb disease spread in the hospital have been largely successful. Still, medical institutions must remain vigilant in their hygienic practices to ensure that the risks to patients are minimized. Hospitals need quality medical computers that help to create a safe and clean environment for both staff and patients.

Your doctors and nurses are constantly moving from one room to the next in your hospital. Throughout their busy day, they visit numerous different patients and co-workers. While they may not directly come into contact with each other, they no doubt all use the same medical computer in any given room. These computers become a breeding ground for harmful pathogens as staff use them throughout the workday.

But not all medical computers are afflicted by this issue. Many of them feature an antimicrobial coating to help protect against microbes.

An antimicrobial coating mitigates the growth of pathogens on whatever surface it is spread on. These coatings work along the same lines as naturally occurring antimicrobial materials, like copper. Antimicrobial materials  interrupt a bacteria cell’s respiratory and metabolic functions. Over a brief period of time, this leads to the cell being unable to create energy and proliferate.

Medical computers like the KW15 from Tangent feature an antimicrobial coating across its surfaces. The KW15’s enclosure mitigates the growth of pathogens, which helps create a safer hospital environment overall. The cast aluminum enclosure is also built to last, and features a fanless cooling system. The KW15 also features other sanitary features, such as a washable touchscreen to help make it even more hygienic.

Doctors and nurses routinely wash their hands throughout a shift to minimize the risk of spreading pathogens around the hospital. Likewise, medical computers should be routinely cleaned to minimize disease transmission. Computers from Tangent feature antimicrobial enclosures to help mitigate this transmission. But they also sport IP rated touchscreens as an added layer of protection. 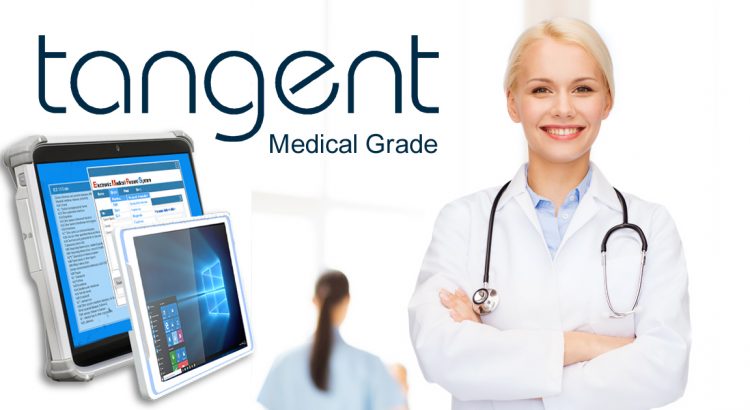 The last year has been a challenging one for many hospitals. The pandemic strained resources and personnel throughout the winter. But things are beginning to turn around, thanks in part to the widespread availability of vaccines. As hospitals exit the pandemic, they must turn their sights back towards helping everyday patients. The lessons learned in the pandemic should not go to waste however. The pandemic has accelerated medical grade computer adoption in the medical industry, and this adoption still has a place in a post-pandemic world.

Telemedicine has seen a remarkable boom in use during the pandemic. Patients with severe conditions rely on hospitals for their treatments. These could be needed on a weekly or daily basis. But when the pandemic hit, these patients were faced with a stark choice: receive the treatment they need and potentially put themselves in harm’s way, or forgo treatment and similarly see a decline in their health.

Neither option is ideal, and that’s where telemedicine came in. Telemedicine on medical computers allowed doctors to virtually connect with their most at-risk patients. Their patients in turn received the quality healthcare they needed. This was accomplished thanks to medical computers like the M24T from Tangent.

The M24T from Tangent is a full-fledged medical computer built with telehealth in mind. The M24T has an impressive front-facing camera that doctors can use in telehealth appointments to allow their patients to actually see them. This face-to-face contact is crucial not only for your patient’s peace-of-mind, but also for your doctors to better understand their patients.

The M24T also has a full touchscreen. This touchscreen allows doctors to view medical charts, x-rays, and other medical information using just their hands. This intuitive design facilitates easier communication between doctors and their patients, and cuts down on wasted time during telemedicine appointments.

Medical computers like the M24T can also connect with remote monitoring technology. Remote monitoring has allowed doctors to remotely perform the tests that some high-risk patients need on a daily or weekly basis, all without needing patients to actually come into the hospital.

All Of The Convenience With None Of The Hassle

Tangent medical computers allow patients to visit with their doctors remotely, getting all the medical care they need without the hassle. For more information, contact Tangent Sales today.

The end of the pandemic is within reach. Over 50% of adults in the U.S. have been vaccinated, and the number continues to climb each day. Many states have begun easing restrictions or set new targets to meet. In either case, a sense of normalcy is within reach. But just because the pandemic is coming to an end does not mean the medical community can be any less vigilant.

Until the pandemic is fully stamped out across the globe, hospitals and medical centers need to retain their covid playbooks. But they also need to think about the future of healthcare at the same time.

Medical computers can play a key role in both areas, helping hospitals continue their pandemic policies while being versatile tools in the post-pandemic world.

Medical Computers During The Pandemic

There’s no doubt that your doctors and nurses have regularly used their medical computers before the pandemic began. But starting last year, the ways in which they rely on these medical devices has drastically shifted.

But with the pandemic, these medical computers became indispensable. The patients most at-risk for infection were no longer able to go into hospitals, despite being the ones who rely on medical care the most. That’s where telehealth options came in, allowing doctors and patients to connect remotely via video chats.

Medical computers allowed patients who relied on their doctors for their health to continue their regular meetings in a virtual manner. Both hospitals and patients have seen the benefits of telehealth, and it’s gearing up to be a permanent part of many hospital’s offerings.

Tangent’s medical computers have been designed for telehealth services since long before the pandemic. Most models come standard with a built-in webcam and microphone.  In addition, their tactile touch screens allow doctors to easily check on medical records, emails, and more throughout calls.

The Medix T13: Built For Every Role

Medical devices have played a critical role in providing quality healthcare to millions of people throughout the pandemic. Now, they’re playing an equally important role in the vaccination process.

The Medix T13 has all the power of a medical computer in a small, portable package. Featuring a convenient carrying handle, doctors and nurses can easily transport the T13 around the hospital. This portability makes it great for vaccination clinics, allowing medical assistants to easily keep track of dosages while remaining mobile. The T13 also comes in a drop-tested, lightweight chassis. This means that no extra protective cases are needed when using the medical tablet, just pick it up and go.

But the T13 won’t stop being useful at the end of the pandemic. The T13 is able to integrate into many of your hospital’s existing workflows. There is no better medical tablet for human milk workflows than the T13.

Keeping track of expressed human milk is a breeze with T13 medical computers thanks to its built-in barcode scanner. Nurses simply take a bottle, print out and affix a label, and scan it into the system. When it comes time to deliver the milk, the nurse likewise takes the bottle out, scans it, and takes it to the NICU. They scan the corresponding baby’s band, confirm the match, and deliver the expressed milk.

The T13 is also Cerner validated and compatible with Cerner Millennium applications.

Other medical computers from Tangent are a bit more traditional in their appearance and applications. But that doesn’t mean they don’t stand out in their own unique ways. Medical computers like the E22B prove this.

The E22B is built with applications like medical carts in mind. Medical carts need to be constantly charged when equipped with traditional medical computers. This can be a hassle, and prevent your full fleet of medical carts from being used.

But with the E22B, your medical carts can run on a 24/7 basis. This is because of their hot-swap battery system. This system allows the E22B to run off two batteries while others are being charged on the charging dock. When the first batteries begin running low, simply swap them out to continue use of the E22B.

The M24T follows in the footsteps of the E22b in some ways, while also being completely unique. The M24T sports a wide 24 inch screen with a sleek bezel. This screen is also a PCAP touch screen, allowing doctors to intuitively use their computer as if they were using their own phone.

The M24T is designed to be the main workstation for doctors. It features 32 GB of RAM, allowing doctors to run multiple medical programs with ease. Doctors can easily run telemedicine software, electronic medical record software, and web browsers without their computer lagging. Advanced NVME storage takes the place of a hard drive in the M24T, allowing for the fastest possible booting and load times.

As the main workstation for your doctors, the M24T also has built in precautions. In the event of a power failure, the M24T has a built in UPS system that allows for 30 minutes of uninterrupted power. This time frame can allow your doctors to save important files and documents, as well as address critical issues before shutting down — all without affecting your hospital’s own UPS.

Some of Tangent’s medical computers are prime examples of their medical technology. The Medix T24B is one such computer, sporting a number of features in one package.

The Medix T24B also features hot-swap batteries, allowing it to run for an extended period without needing to be plugged in. This makes the T24B the perfect device for pop-up clinics, and other temporary arrangements in the hospital.

Like all of Tangent’s medical computers, the T24b features an antimicrobial coating. This coating mitigates the growth of harmful pathogens on its surfaces. The coating works to protect doctors and nurses throughout their work day. With an IP rated touchscreen, the T24B is also fully washable.

Medical Computers For Today And Tomorrow

The pandemic has drastically changed the medical landscape. While the world is returning to a sense of normalcy, it will take some time for hospitals to readjust to a pandemic-free world. In the meantime, hospitals can prepare for the problems of today and tomorrow with Tangent medical computers. For more information, contact Tangent Sales today.