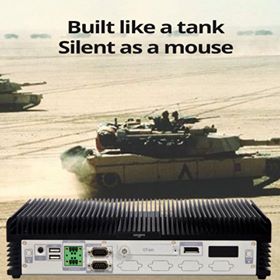 At first blush, a Tangent Rugged industrial computer looks strikingly like a massive CPU with no fan. The familiar heat dispersing fins and it’s diminutive size are quite deceiving in this way, but it truly is a fully featured industrial computer. Many of the PCs in the Rugged line, like the Rugged Tank, are fanless industrial computers that utilize passive cooling technology instead of a fan blowing on hot internal components. Passive cooling happens by way of heat dissipation as air flows over the unique and expertly designed heat sink that transfers warmth away from the internal computer components. This method is excellent for eliminating noise and internal dust build-up, as well as vastly reducing energy consumption.

Another factor in noise reduction on these mini industrial computers is the option (and recommendation) for solid state hard drives as opposed to standard hard disc drives with a spinning disc. No fans and no moving disc parts equates to a much greater reliability, durability and service uptime. The lack of moving parts in the Rugged industrial computer also allows it to operate in extreme and fluctuating temperatures with ease. It works equally well in a refrigerated food processing plant or in a desert off-road rally race. That’s no joke either, the Rugged Tank industrial computer has been tested and rated to withstand consistent shock and vibration. It’s ideal for in-vehicle applications such as construction or farming vehicles, news vans, or industrial forklifts.

Being a fanless mini industrial computer doesn’t nearly suggest that it’s a slouch in terms of performance. Depending on one’s requirements, it can be customized to be a daily workhorse or a high powered workstation. Processors offered range from an Intel Celeron Dual-Core to an Intel i7 Quad-Core, and memory is offered at up to 16GB. It is equipped standard with either Windows 7 or Windows 10, and has TPM 1.2 and  RAID support. The petite industrial PC has an abundance of available I/O ports including three video outputs, six COM, six USB inputs, 2 LAN, WLAN, audio, and several others. As the name suggests, this little industrial computer is truly a formidable tank. Tangent’s Rugged mini PCs are powerful and effective in environments experiencing extreme temperature or constant shock and vibration, or spaces that require extreme cleanliness. From the precise and sterile to the dirty and industrial, Tangent has a computer solution to rise to the occasion.