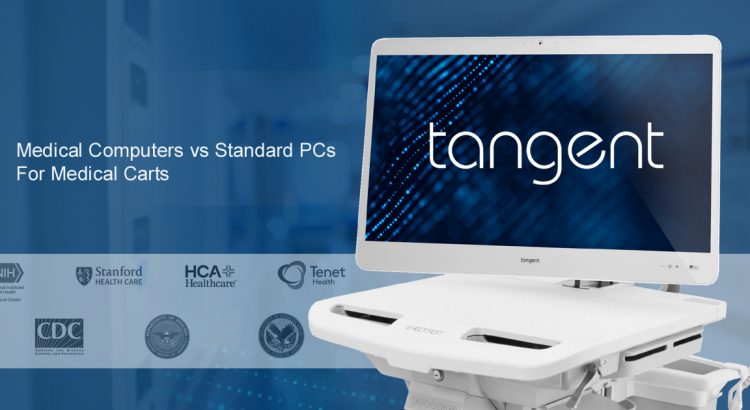 How Computer Cords Can Be A Workplace Hazard

Reducing hazards to patients and staff is one of the foremost considerations in healthcare environments. While they may seem trivial, falls are one hazard that can cause harm in the hospital. In fact, The National Patient Safety Goals (NPSGs) directly addresses fall prevention as a necessary factor to combat health care-associated harms. An effective fall prevention program includes environmental measures to combat falls, such as reducing the number of cords on a room’s floor.

There are a number of ways that computer cords can cause issues in the hospital:

While traditional computers rely on power cords to function, some medical computers do not. Medical computers like the T24B from Tangent can hold up to 3 high capacity lithium ion battery cells inside its casing. The T24B only needs one battery to operate, allowing workers to charge the other two on the multi cell charging dock. With two batteries inside of it, the T24B will seamlessly switch from the one to the other when the first runs out of power. The unit will also activate a low-battery LED light, letting workers know it is time to swap out the batteries.

Although most hospitals have emergency electrical generators, they don’t always offer uninterrupted power. In the case of an outage, most computers will power off until the electricity is back online as provided by the on-site generator. The T24B won’t suffer from these hiccups. It’s built-in operational battery packs will keep this system alive whether it’s plugged in via the AC direct power adapter or operating off its batteries.

Power Anywhere And On The Move

The T24B Medical computer can recharge its batteries via the provided AC adapter or its built-in battery ports. During the pandemic, hospitals have set up outdoor screening tents and relied on small portable gas generators to power up their medical carts and EHR computers. Hospitals can eliminate the need for independent generators with medical computers like the T24B. A medical computer with these batteries can run for up to 30 hours.

Hot-swap battery ready medical computers also eliminate the need for powered medical carts. Powered medical carts can cost your IT department both time and money in upfront costs and maintenance. With Tangent, when the time comes to replace a battery, all your IT department will need to do is call Tangent for a warranty replacement — there’s no need to dig out old manuals. There’s no need to ship out a large medical cart, and there’s no downtime either; just divide up your other battery cells until the new one arrives.

Tangent medical computers offer hospitals a way to get the computing power they need, without the hassle and maintenance that traditional computers require. Tangent’s California-based team of technical support specialists is always ready to assist your hospital in the rare event that service is needed. For more information, contact Tangent Sales today.